NCI-supported researchers have developed a new artificial intelligence (AI)-based biomarker to help predict and monitor a patient's response to immunotherapy for lung cancer.

The findings, published in Science Advances, show that measuring the way blood circulates within the tumor (i.e., the tumor tortuosity) can be used to predict the effectiveness of immunotherapy drugs, such as immune checkpoint inhibitors.

See the article for full details on this AI tool.

The researchers found that patients who responded poorly to treatment had increased “twistedness” in their tumor vasculature (i.e., increased quantitative vessel tortuosity, or QVT). 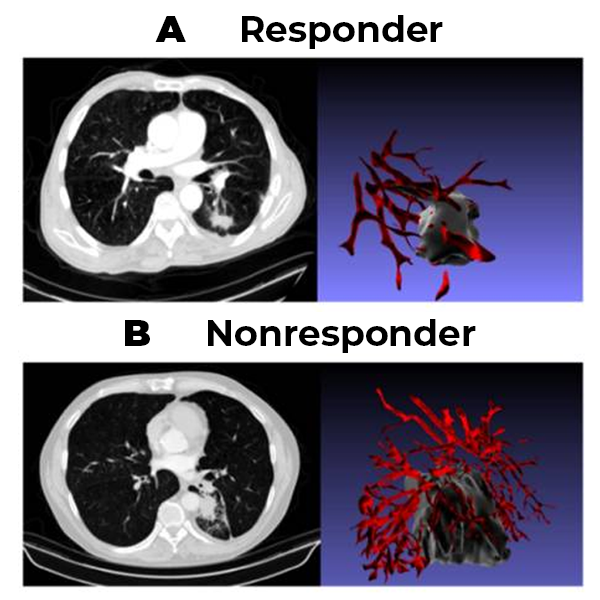 Patients who (A) responded to immunotherapy had tumors with fewer tortuous blood vessels, compared with (B) nonresponders. Figure shows computed tomography scans and corresponding 3D-renderings of the tumor and vasculature.

QVT directly reflected the patients’ responses to treatment. The approach is based on the idea that even though anti-tumor cells collect at the tumor site, increased vasculature twistedness prevents the cells from penetrating deeply and triggering the responses necessary to promote an antitumor immune response.

This was the first study to use radiomic patterns from tumor vasculature from routine computed tomography (CT) images to predict the response of non–small cell lung cancer to immune checkpoint inhibitors. The researchers developed mathematical measurements to assess the degree of vasculature within tumors and then compared those results with patient outcomes. They found that tumors with the sharpest twists and turns in vasculature had the poorest response to treatment—both to immune checkpoint inhibitors and to a combination of chemotherapy and immunotherapy.

Principal investigator, Dr. Anant Madabhushi, said, “We considered cellular, molecular, and genomic data in validating this AI-based biomarker, which is the first of its kind to use routine CTs for predicting treatment success.”

“Because it uses data derived from routine radiographs, the tool could someday be a part of clinical workflows, offering a noninvasive and inexpensive method for identifying patients who are most likely to respond to treatment and to monitor their treatment responses.” To that end, the technology is now licensed to Picture Health, a company co-founded by Dr. Madabhushi, to bring this technology into clinics.